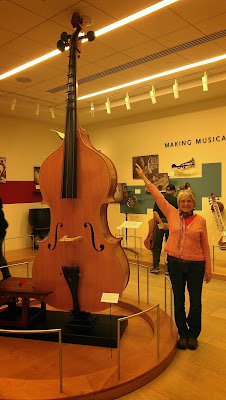 We've been to the Louvre and the Vatican and the Chicago Art Institute and museums in Madrid and Rome and London and New York...but one of the most impactful we've ever seen is here in Phoenix.  The Musical Instrument Museum is much more than it's name would indicate.  This is really a museum of humanity, human culture and the diversity of our species.  Housing over 10,000 musical instruments from nearly 200 countries--from a 6,000 year old drum to the piano on which John Lennon wrote "Imagine"--the museum drives home the importance of music to all cultures.  We see and hear the incredible diversity of human expression of music and, at the same time, the common expressive impulse that we share with people of remote places and times.

They have a wonderful introductory video on their web site that gives a great overview of this place. 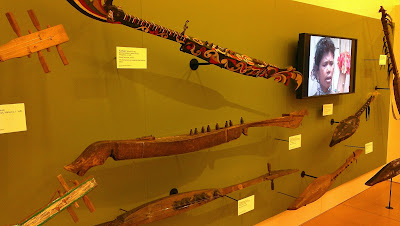 The MIM is less than three years old and was very well-funded by the founder of Target stores.  Its use of wireless technology really makes it work.  The entire second floor is broken into small exhibits for each country, region, tribe or style of music featured.  In each exhibit (and there must be 300) there are examples of instruments, some written background and a video looping 2-4 live recordings of the instruments being played, many with accompanying  singing or dancing.  All visitors are given headphones and a wireless receiver that picks up the sound from the nearest video display as you move through them.  So the experience is one of moving from country to country, viewing several instruments from each country while watching and listening to the best artists playing those instruments in their original home and in their home society.  It felt like a world tour crammed into a day.  And somehow it wasn't just about the music, though that was foremost, it was also seeing the homes and streets or villages and the people talking and singing and dancing.  It was nothing less than a celebration of the entirety of human culture as represented by music, the universal language.  Amazing.
One of the most moving stories was of a group of kids from South America who wanted to learn to play music, but couldn't afford instruments.  So their teacher took them out into the landfill and they found things to make instruments with--pieces of pipe, oil cans, coins, spoons and forks, scrap wood, etc.  They made amazing instruments from these materials and now tour the world playing (just a few months ago at MIM).

Posted by ClamPuddingPaddler at 8:36 PM