There are two ways to drive from Durango, across the San Juans, to Ridgway. The most direct route is on a road called the “Million Dollar Highway”, thus named because there is supposed to be millions of dollars worth of silver ore in the gravel used to build the road. This road crosses three high passes and in many places has no guardrail, no shoulder, hairpin turns with no visibility and lots of truck traffic. We opted to take the longer San Juan Skyway between Cortez and Ridgway and found it a beautiful mountain drive (without the white knuckles).

We camped in Ridgway State Park, which was a wonderful home base. The campground was right on the Uncompahgre River, which was strongly flowing and quite a good trout fishery. There were also fishing ponds in the campground and Lynnae caught dinner there a few nights

From Ridgway we could see the spectacular Dallas Divide of the northern San Juans and explored several nearby highlights: the old mining town of Ouray (the Switzerland of America), Yankee Boy Basin on a 4WD tour, the winding dirt road over Owl Creek Pass to Silver Jack Lake, the awesome Blue Lakes trail and even the clothing-optional Orvis Hot Springs, in use since the days when the Utes still occupied the area. The San Juans are an amazing mountain range in a state with over 50 ranges. There are over 1,000 peaks more than 10,000 feet tall and over 100 above 13,000 feet. We drove and hiked deep into the mountains and found pristine blue lakes, wildflowers in abundance and drop-dead-gorgeous mountains. We’ll be back.


For more detail and pictures of some of our adventures in the northern San Juans, visit the Outdooor Project: 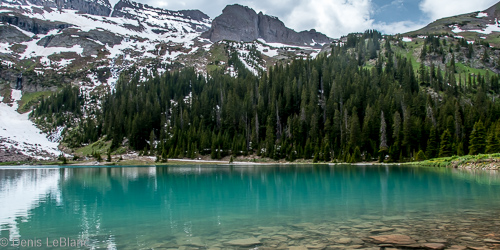 Posted by ClamPuddingPaddler at 1:29 PM No comments:

Durango and the San Juan Mountains

Leaving Mesa Verde, we were excited to be approaching the mountains after so many months of red rocks, desert plants and canyon country, as beautiful as that had been. Our destination was Durango, a railroad and mining town perched at the sourthern edge of the San Juan Mountains of southwestern Colorado.

Even as we approached Durango, the countryside was getting greener. Colorado had an extremely wet spring (sorry, California) and all the rivers, lakes and streams are very full and high. There was still snow on the high peaks of the San Juans and we could hardly wait to get there. We camped in a lovely campground only about 10 minutes from downtown Durango, but way out in the woods. We hiked some nearby trails that brought us views of the high peaks, but we were still a bit far to say we were IN the mountains. That would soon change.

Durango was a bucket list place for me, or more specifically, the Durango-Silverton Narrow Gauge Railroad. The DSNGA started hauling ore over the mountains back in the 1880’s. Today it runs for tourists, but it has an authenticity and charm that can’t be denied. The train runs up to Silverton, which is a tiny mining town deep in the San Juans. Three hours up and three hours back with time for lunch in Silverton makes the train ride an all day adventure. We travelled along the Animas River all the way, sometimes perched hundreds of feet above it, and gazed in awe at the beautiful mountains we passed the whole time. The train has beautifully-restored cars and we rode up with a living-history guide who talked about the history of the railroad and the area. We rode back in an open car which made for some fun photo opportunities. We loved this trip on the train and thought it was one of the best things we’ve done in a long time.


Posted by ClamPuddingPaddler at 1:19 PM No comments:

We reluctantly left the beautiful Monument Valley and had a short drive through the southeast corner of Utah on our way to Colorado.  Our first stop was five days at Mesa Verde National Park, one of America's premier collections of ancient Puebloan (also called by their Navajo name, Anasazi) cliff dwellings and ruins.

The Ancestral Puebloans (as they are called by their present-day descendants, the pueblo-dwelling people in New Mexico, Arizona and Texas) moved to the Mesa Verde area around 500 AD.  Living mostly on the mesa tops, where the south-sloping landscape had a longer growing season, until about 1200 AD, when many of them moved down into the canyons and built dwellings in the natural caves, or "alcoves" high above the canyon floor.  Using just stone tools, they shaped sandstone blocks and built dwellings, some of the four stories tall, that nestled in among the rocks like a natural part of the cliff.  Around 1300 AD, they inexplicably left and moved south.  Was it due to climate change, or invading enemies, or depletion of game animals, or some combination of these?

Today, these dwellings are haunting legacies of the past that evoke wonder and curiosity and, most of all, an appreciation of the hard-working people who scratched a living out of this hostile environment for over 600 years.


Posted by ClamPuddingPaddler at 9:15 PM No comments: 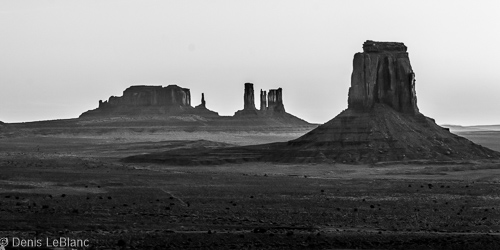 Anyone who has seen any old John Ford western like Stagecoach, My Darling Clementine or Fort Apache will recognize Monument Valley right away.  Probably no place in the west is as much an iconic symbol of the cowboy and Indian, the desperado and the westward expansion.  It is also a sacred place for the Navajo people on whose land the valley lies.  Today the valley is a Navajo Nation Tribal Park and is an absolutely spectacular place to visit.

We stayed in the Navajo-run campground right in the middle of the valley and had views of the sunsets and sunrises on the famous "mitten" buttes every day.  We also drove the scenic loop and hiked the few trails open to visitors.  I think it is safe to say that this valley is photogenic from just about every angle and vantage point and in almost any light.  So I took lots of pictures and have a gallery up on Google+ with the best ones: 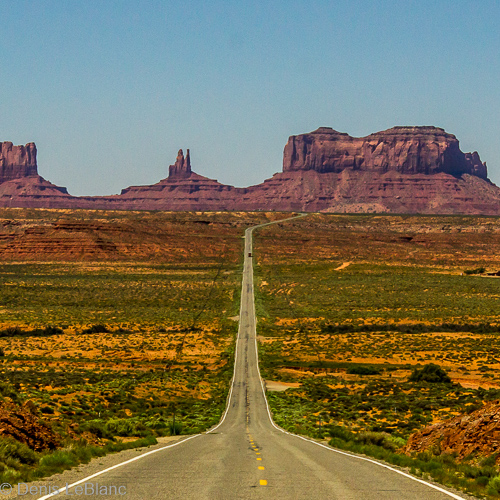 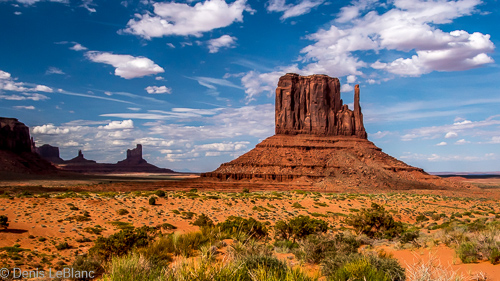 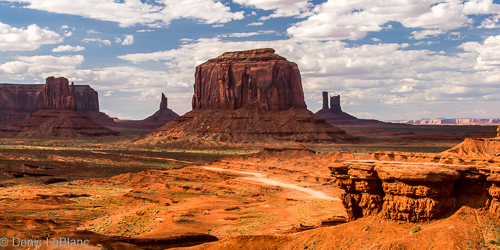 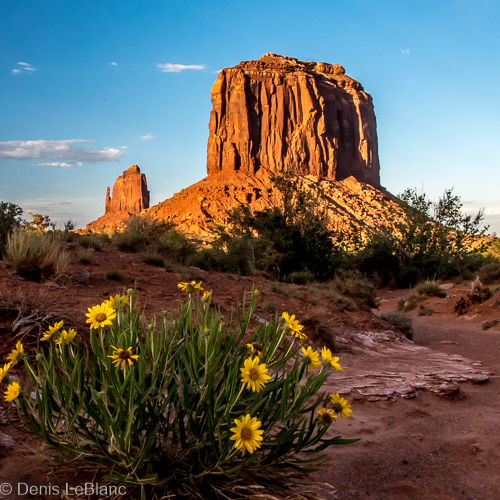 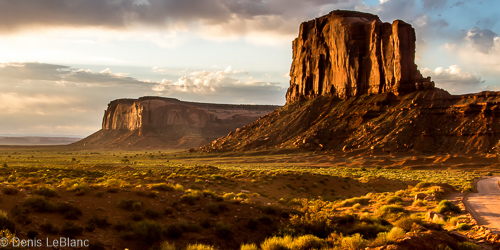 We also took a Navajo tour of a nearby area called Mystery Valley.  Here there are many ruins and artifacts from what the Navajo call the Anasazi, also called the ancestral Puebloan people, of whom the current-day Hopi, Zuni and many others are descendants.  Our guide, Don, was a wonderful and wise man who drove us around the valley and took us to ruins and arches and petroglyph sites and finally to the best sunset-viewing spot in the area.  At one point he mentioned my arrowhead necklace and talked about learning the various sacred songs as a boy and then he sang us the arrowhead song while we sat in a rock alcove by some ancient ruins.  Very moving!  He also told us of his travels to Russia, where he was invited due to his work in keeping the Navajo language alive with the youth, and meeting people in Siberia who wanted to keep their language alive.  He recalled thinking that one of the women looked like his aunt, and as he learned more, found that many words in their language were similar to Navajo words and their beadwork was similar to Apache beadwork.  These people were likely remote relatives, all Athabascan people, from the time before the Navajo ancestors had crossed the Bering Sea!  Needless to say, this tour was the highlight of our stay in Monument Valley. Enjoy the pictures and do look at my full gallery on Google+. 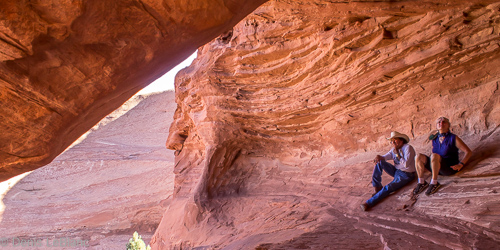 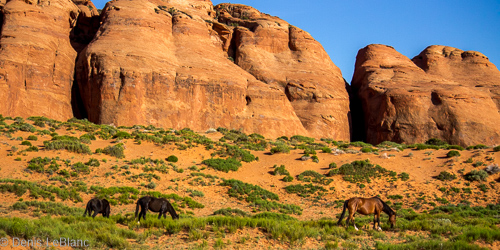 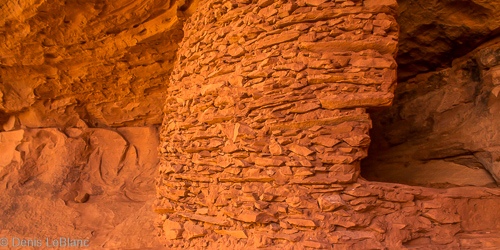 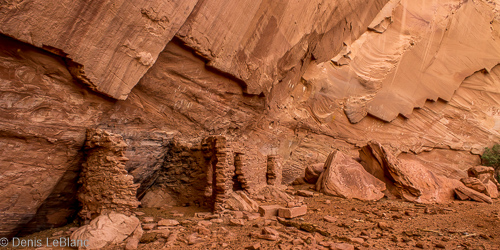 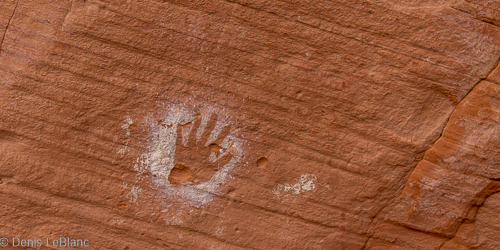 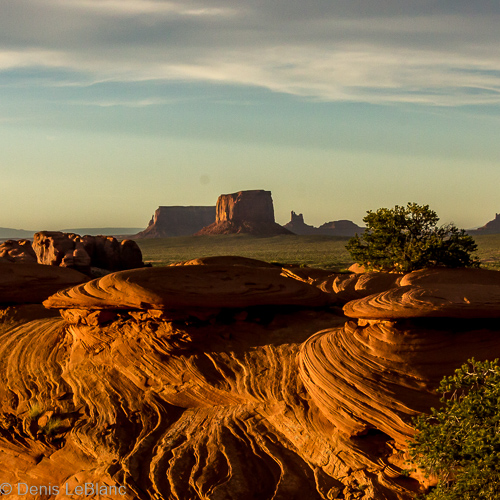 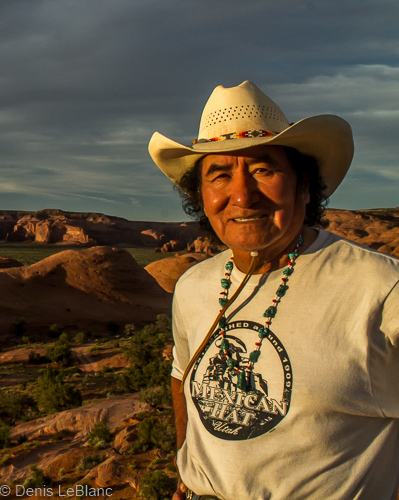 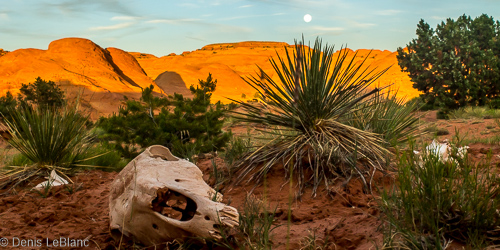 Founded in 1957 with the romantic name of "Government Camp" to house the workers building the Glen Canyon Dam, Page, Arizona is primarily a tourist town today.  It is the gateway to Lake Powell and the jumping-off point for many adventures and scenic destinations.  It was only 15 miles from here at Lee's Ferry that we boarded rafts for our 6-day Grand Canyon trip a few weeks ago.  We had come here primarily to visit the local slot canyons that have become somewhat of a photographers' Mecca in recent years.  We only planned to stay a few days as we moved east on the way to Colorado.

Lower and Upper Antelope Canyons are located on the Navajo Nation, which covers significant portions of Arizona and New Mexico.  The only way to visit these canyons is with a Navajo guide and these tours can be quite expensive, depending on the size and length of the tour.  We decided to book a tour that was specifically for photographers, giving us more time in the canyons, and which also included visits to two other canyons only available from this one guide company.  All four canyons we visited were spectacular in their own way.  Nowhere else in all our travels have we seen places like this and the photographic opportunities were endless.  In the Upper and Lower Antelope Canyons, the crowds were nearly overwhelming, but our guides did a good job of clearing the way for us (photography tours have a sort of right-of-way in these canyons, which you pay for). The photos of these canyons speak for themselves. 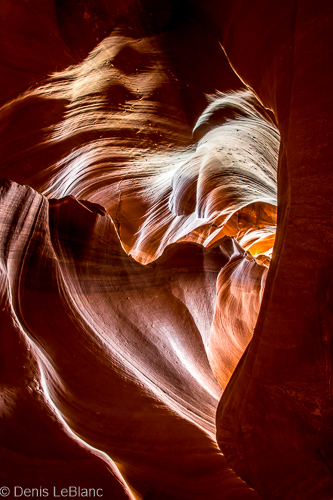 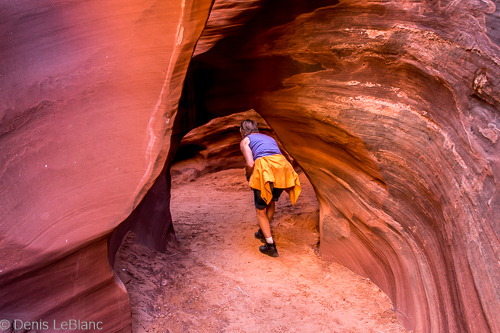 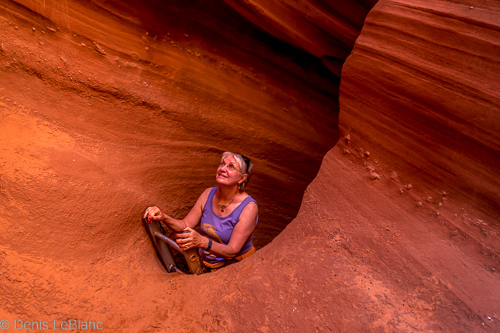 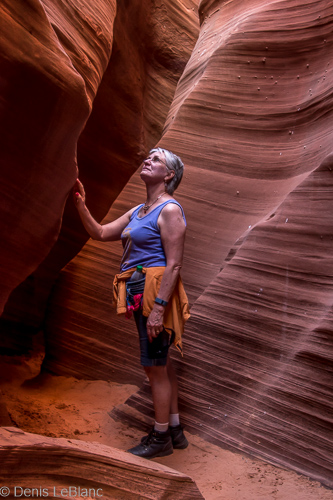 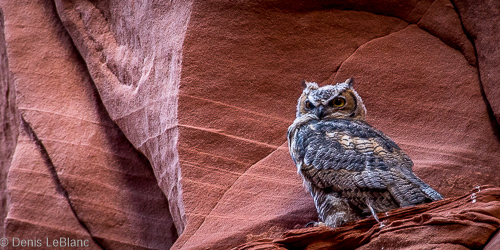 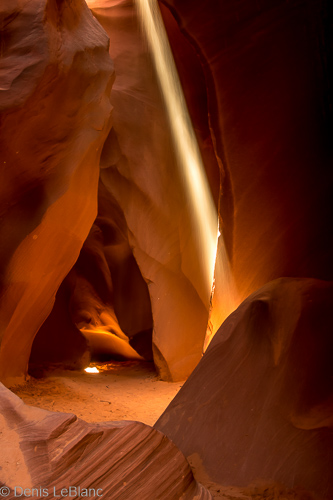 Posted by ClamPuddingPaddler at 7:56 AM No comments: