We were delayed getting on the road yesterday morning when we found ice had built up on top of our trailer slide-outs and I had to get up on the roof and sweep/shovel all the ice and snow off.  This took about two hours, but I'm glad I had the opportunity to walk around on an icy roof 12 feet off the ground with a 30 MPH wind whipping around.  At least the views were nice!

After a three-hour drive from Texas into New Mexico where we saw more many more oil wells than we had in Oklahoma (but we also got our first glimpse of a real Western mountain range, the Guadalupe Mountains), we settled into our campground at the entrance to Carlsbad Caverns NP.  We got up early and ended up spending all day down in the cave.  We did the self-guided tour of the "big room" and ranger-led tours of the "Kings Palace" and the lower cave.  Having read a lot of peoples' comments about Carlsbad, I had high expectations--and they were exceeded.

This is a very spectacular natural wonder.  The beauty and variety of rock formations and the size of the big room (either 8 or 14 football fields, depending on which sign you read) affected me like very few places I've ever seen.  Being here on a relative off season, we wandered around the big room for 1-1/2 hours and felt like we owned it, other than a few rangers we never saw another person as we took in the features.  Pictures cannot come close to conveying what this place is like. 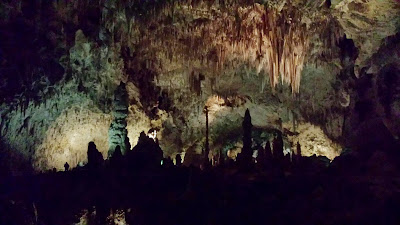 The ranger-guided tours were informative and fun, especially the tour of the "lower cave", which is not lit with electric lights so we had to wear hardhats with headlamps and special gloves so we could touch the rocks without damaging them (skin oils can eventually destroy the delicate crystal formations.  For three hours 12 of us descended knotted ropes, steel ladders 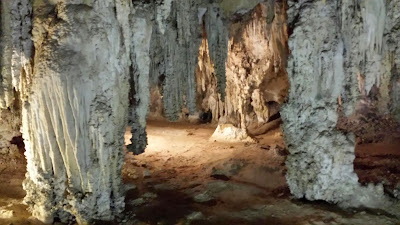 and slippery slopes; crawled through narrow openings, hit our heads on low-hanging rocks and even had to crawl on our hands and knees for about 15 feet through a tunnel with the only light being our headlamps.  Carlsbad doesn't get the "press" of the Grand Canyon or Yellowstone, but it is every bit as amazing and wonder-inducing. 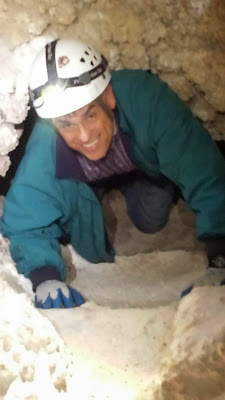 Posted by ClamPuddingPaddler at 8:07 PM