Lions and Tigers and Shows, Oh My!

We had planned to stay in Branson for just three days, but that stretched to six as we found some shows we liked and also took in a few other sights.  We visited a tiger sanctuary just north of town and that was very cool.  Seeing the beautiful cats from just a few feet away and watching them be fed was a good respite from the glitz and hustle of Branson.

Branson is kind of like Vegas without the gambling, or the bright lights or the theme-park hotels...basically everything except the Elvis impersonators, washed-up country acts and magicians.  The town itself is a vision of city planning gone bad--fast food, motels, theaters, mini golf, "museums" like the Titanic Museum and Ripley's Believe it or Not all jumbled up on a gridlocked "strip" about two miles long.  Discount ticket agencies are everywhere, most requiring a timeshare sales pitch to get the discounts.  We found a legit 2-for-1 ticket agency and bought most of our tickets there.  We saw seven shows that ran all gamuts from bad to great and from tiny, low-budget productions to huge staged estravaganzas.  Some of our favorites were the Haygoods, a family of five brothers and a sister who grew up poor in the Ozarks but had been performing literally since they were toddlers.  They played several insturments each, sang really well and had a production with lazer lights and video that was nonstop two hours of true entertainment. "Six" was similar in scale but was six very talented brothers who sing a capella for two hours.  They make all the instruments with their voices, including drums, bass, electric guitar and trumpet.  Their show was very fun and entertaining too.

We also took in a couple of tribute bands, one for the Eagles and one for Journey.  Both were very good bands and musicians, but the Journey band was amazing because of the lead vocalist, who sounded just like Steve Perry.  Jason Yeager was his name and he was a finalist on season 7 of American Idol.  His story is kind of sad because he got a raw deal on American Idol and was eliminated sooner than he probably should have been.  He and his band put on a great show and were the best act we saw all week in Branson.  The most entertaining tribute (in a funky sort of way) was Joseph Hall's Elvis show.  He is a mid-twenties kid who played Elvis from his start as a rockabilly artist up through his Vegas superstar-in-a-rhinestone-covered-white-stretch-suit act.  The audience of mostly elderly ladies went crazy over him and some nearly passed out when "Elvis" came out to the audience to give them a scarf and a kiss on the cheek.  (Lynnae was not one of the passed out ones, she insists I inform you.)

One other interesting thing we did was to eat dinner at the College of the Ozarks.  This college, founded in 1906, is unique in that it is tuition-free for all students who earn their keep by working 15 hours per week.  So the restaurant on campus is staffed completely by students, who also grow the vegetables, raise the dairy cows and pigs and cook everything from scratch.  The food was fantastic, the kids were as Ozark-mountain polite as you could want and we thoroughly enjoyed the experience.

We actually enjoyed our whole time in Branson, but we were ready to leave and begin the drive across Arkansas, Oklahoma and Texas to cover some parts of the old Route 66 and catch such other wonders as we can find there. 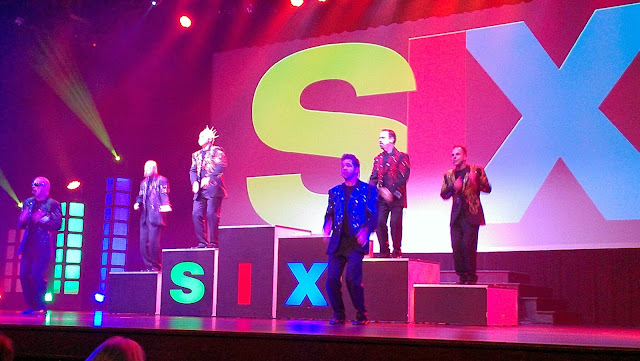 Posted by ClamPuddingPaddler at 11:27 AM