The state of Utah has been promoting tourism in the state with its "Mighty 5" program to encourage travel to its five national parks.  Most people have heard of Zion and Bryce, maybe Canyonlands and Arches, but the least-known park has to be Capitol Reef.  It doesn't have iconic images like the Delicate Arch or the amphitheater at Bryce, so maybe people don't really know what is there, but we were blown away at the beauty, isolation and geological wonders of the park.  Plus it has one of the nicest national park campgrounds that we've had the pleasure to call home.

Capitol Reef is about 100 miles long and runs north-south.  It is bisected at its waist by the only paved road through the park, UT-24.  Much of the area is only accessible by trail or 4WD road. There is much to see right around the campground and visitors center, which is located in an old Mormon settlement called Fruita.  It still has over 3,000 old fruit trees planted nearly 100 years ago and which, along with the huge cottonwood trees, forms an oasis in the dry high desert of south-central Utah. The main geological feature of the park is the Waterpocket Fold, a 100-mile-long anticline (fault in the earth) that creates dramatic cliffs on the west side. 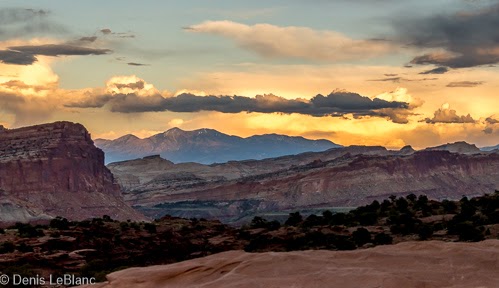 Feeling adventurous, we decided to take the backcounty loop to Cathedral Valley, one of the most beautiful and remote sections of the park.  The roads are composed of bentonite clay, which forms a sticky/slippery goo when wet, so any significant rainfall makes them impassable to any vehicles. We were warned that we could be stranded out there, possibly for days.  But the forecast was calling for scattered showers, nothing to heavy, so we decided to chance it.  With a full tank of fuel, extra food, water and clothes and good maps, the three of us headed off to an 8-hour drive through some of the most remote and beautiful country we've seen.  We made it back fine and are really glad we went there. 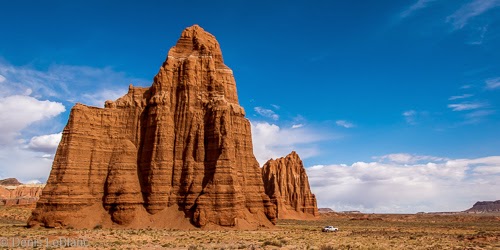 Temples of the Sun and Moon, Lower Cathedral Valley