The Grand Canyon of the Colorado River

For over 3 months we have been dancing around the Grand Canyon.  We left California in early February and crossed the Colorado River at Yuma, then camped at Lake Havasu in March just upstream from Yuma.  We crossed the Virgin River (which flows into the Colorado just downstream from the end of the Grand Canyon) repeatedly in Zion in late March. We looked at the Colorado (and the Green, which joins forces with it just above Lake Powell) from 2,000 feet above at Dead Horse Point in April. We saw the San Juan River, which also joins with the Colorado above the Glen Canyon Dam, from high above on Muley Point in late April and crossed it a few days later at the very beginning of Lake Powell. Finally boarding a tiny plane on May 12, we flew across the Grand Staircase from Las Vegas to Lees Ferry, 15 miles below the Glen Canyon Dam, where we would begin an epic adventure--rafting the Grand Canyon of the Colorado.

The Colorado River is epic in many dimensions.  As measured by the combination of length, vertical drop and volume of water, there is no river in the world to match it.  It starts at 14,000 feet in the Colorado Rockies and ends with a whimper in the desert of Baja California--never reaching the ocean--after supporting tens of millions of people with food, water, recreation and electricity on its way.  The Grand Canyon was "discovered" by the Spanish in 1540, but their Hopi guides already knew it was there.  It would not be explored for over 300 years more, when Major John Wesley Powell  led a small expedition in 1869 into the unknown, because people literally did not know what was down there.  They knew some rivers went in and one came out, but the entire 300-mile area was a blank spot on the map.  Fittingly, today is the anniversary of the launching of the Powell expedition 146 years ago. Powells small crew nearly died, but by the time they came out 3 months later, they knew that there weren't huge waterfalls or whirlpools or giant grizzly bears (all suppositions at the time).

Over the next 80 years, only about 100 people would travel through the Grand Canyon. It became a national park in 1918 and in 1963, the Glen Canyon dam forever blocked the free flow from upstream and the amount of water flowing through the Grand Canyon became dependent on how much electricity was needed in Las Vegas and Phoenix.  Some attempts were made to erect dams inside the canyon, but failed as the country came to realize what a treasure the canyon was.

Our trip began in Las Vegas, boarding a bus at our hotel at 5 AM, then a tiny plane in Boulder City Nevada to the Marble Canyon airstrip, then another bus to the put-in place on the river at Lees Ferry (Mile 1).  We wouldn't get on the river until about 10 AM. 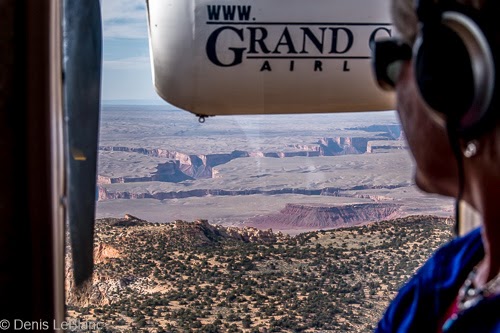 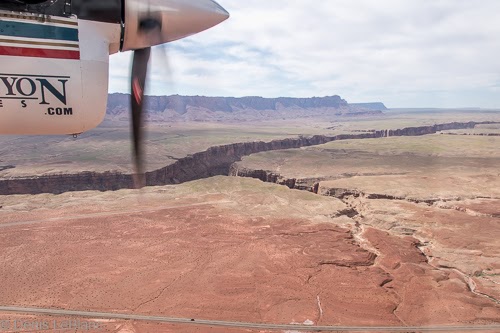 To be continued ...
Posted by ClamPuddingPaddler at 6:00 AM