Two nights in a row at the Station Inn 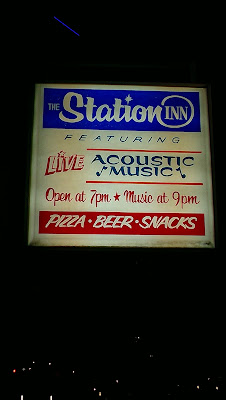 We love this place.  This old venue just drips with history and musical karma.  It's fair to say that every famous bluegrass artist has played here, probably dozens if not hundreds of times. It's an old cinder block building without windows in what used to be a warehouse and vacant lot area West of downtown Nashville.  Now the neighborhood is "The Gulch" and is all high-rise condos and valet-parking restaurants--all surrounding the old Station Inn.   I chatted with the owner of the club and asked whether the neighborhood was going to squeeze them out, but he said he would keep on doing their thing as long as they could.  To me, the surroundings just make the place even more classic by contrast.

Friday night we saw New Town, a bluegrass band from Lexington Kentucky featuring Katie Penn as singer and fiddle player.  Katie had a brief country music career, but as her bandmate said, she wanted to get back to her lucrative bluegrass where she's made "tens of dollars".  New Town was a solid band with great vocals and tight musicians.

Saturday we arrived at 6:30 for a 7:00 door opening for a 9:00 show...and the line at 6:30 was already long.   In a town with about a hundred music venues to choose from on a Saturday night, this turnout is indicative of how popular is the band The Steeldrivers.  We've seen them a number of times, including twice last spring in Nashville and Gettysburg.  They are another solid, tight bluegrass band, but their big draw is their amazing bluesy lead singer, Gary Nichols.   These guys brought down the house.  Gary was a country artist previously and the fiddle player toured with Reba McEntyre.   Both of them joked that they gave up the private jets to ride a 12-passenger van and make the big bluegrass money.   I'm just glad that they're doing what they do!  My clip from last night:

Posted by ClamPuddingPaddler at 1:00 PM