We pulled into the Cindarella Motel and Campsite well after dark.  The heavily-tatooed biker-type in the motel office was a man of few words, just waving in the general direction of the pitch dark campground behind the motel and telling me to take any site after #6.  At least it wasn't raining.  When we awoke the next morning, we were relieved to see that Cindarella was actually a pretty nice place, though without amenities like a pool or clubhouse.  Nicely wooded and almost empty, we figured we could spend a couple nights here while we explored Niagara Falls.

A ten minute drive took us into the town on the US side of the falls and after a Starbucks we met our "PediCab" tour guide (and pedaler) for our tour.   As a footnote, Lynnae and I were talking about how cool it would be to see a map with a pin on every Starbucks either of us had been to--it would be quite a sight!  Gaelan is a twenty-something guy who was born and raised in Niagara Falls and has been giving tours for years.  He was fun and easy to  be with and he knew lots of great spots to see the falls. He accompanied us on the Maid of the Mist boat that took us right to the base of Horseshoe falls and next to American Falls.   This was a very cool trip--though you can get pretty wet even with the flimsy poncho they give everyone to wear. 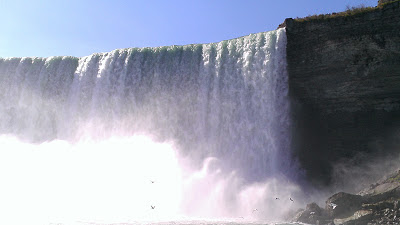 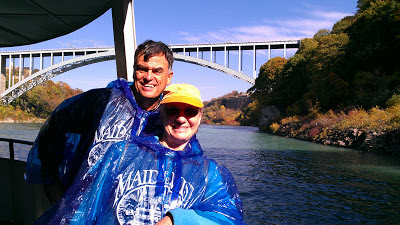 Later that afternoon, we went over to the Candian side, where you can see the falls from a different vantage and hit the Hard Rock, Rainforest Cafe or TGI Fridays if you want to imagine that you are anywhere but Niagara Falls.  They light the falls up at night and it is really a spectacular sight.  The coolest view is right next to the edge of Horseshoe falls:


Posted by ClamPuddingPaddler at 6:45 PM