I know, I know...I am starting to sound like a broken record ("what is a record?" everyone under 30 asks).  But I just obsess about the people who found these wonders like Hetch Hetchy and their first thought was, "Gee, we can improve that thing that took 20 million years to create and fill it with water".  So another case in point is the giant Sequoia.  No one had ever seen trees like this before.  The mature ones were 2,000 to 3,000-years-old.  Their dimensions were immense.  So what did the early settlers do?  They cut them down.  In one case, they cut a huge one down and dissassembled a 30 foot section of the trunk and shipped the pieces to Chicago for the 1892 Exposition and reassembled the trunk there--where no one believed it was a real tree!  It was called the "California Hoax".  So they killed the tree to impress people how big the tree was, but no one was impressed.

The saddest case is the story of Converse Basin, once the largest grove of mature Sequoias in the world.  It was privately-owned, and in the late 1800s was extensively logged.  This was not even a successful commercial venture because when Sequoias fall, they tend to splinter into unusable wood.  So these magnificent trees were all cut down to become pencils and grapevine stakes. So in the end, only one mature Sequoia survives in Converse Basin, the Boole Tree, ironically named for the foreman of the lumber company that cut down all the others.  But what a magnificent tree it is! 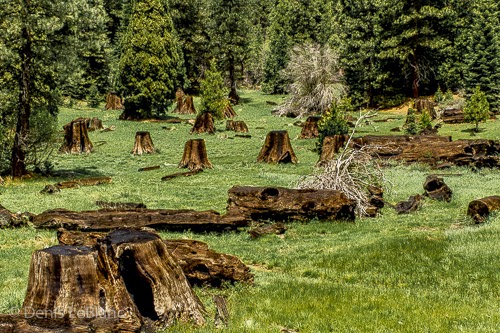 Today we walked through the remains of a once-great forest, tomorrow we get to visit a living one in Sequoia National Park!


Posted by ClamPuddingPaddler at 11:26 PM