To Have or Have Not

I don't write much about interesting people we meet on the road (I should probably get over my reluctance to take their pictures), but I have to tell you about our recent neighbor during one short stay in town getting groceries running errands.  I won't mention his real name, but he also goes by Wavy Gravy.  Wavy has lived in the trailer park for about 15 years and doesn't own a car--he rides his bicycle everywhere or ride shares.  His home is modest: 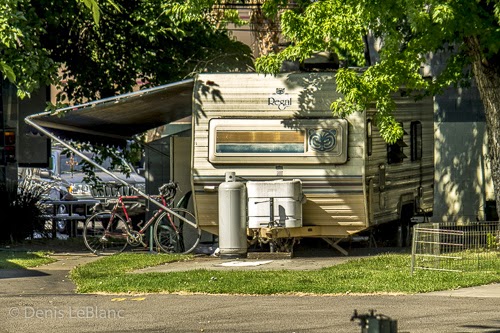 He is 63, tall and skinny with long hair and makes a little money by house-sitting and selling pot.  His main pastimes are writing poetry (after the style of the beat poets) and watching baseball....and getting stoned.  I suspect he may do all three simultaneously.

We shared a beer at the picnic table and traded stories about the 60s (we were both at Altamont). We were talking politics and local Fresno lore when he floored me with a comment. After noting that the country was becoming increasingly divided between the "haves" and the "have nots", Wavy said "I never would have predicted 30 years ago that I would end up one of the "haves"."  I thought for sure that he was about to say "have nots", but I was completely wrong.  He sees his life as successful and secure and is grateful that he never held a regular job. He seems quite happy to me, but you never really know what goes on in a person's life. I thought he was very articulate and pleasant...a nice guy.

I guess I never would have predicted that I might spend my "golden years" hanging out in trailer parks and having neighbors like Wavy.  But like him, I feel like one of the "haves", especially when I wake up to the sound of a river tumbling nearby and look forward to a hike up a mountain or a bike ride around a high-mountain meadow with my sweetie.

Posted by ClamPuddingPaddler at 9:36 AM