The Georgia Coast and Cumberland Island

After leaving Savannah, it was a fairly short couple hours to pick up bar-b-que at the Georgia Pig, which lived up to its reputation for great food and weird vibes.  Another short drive got us to the Walkabout RV Park in Woodbine, GA--a small, old RV park recently bought by a couple from Australia.  It was simple and quiet and had its own boardwalk and gazebo on the Crooked River (courtesy of the defunct housing development next door, "The Landing at Crooked River").  We relaxed for much of the week (the dining choices and attractions in Woodbine were limited) while I worked for my first week on the road--more about that in a later post.

One of the unique events in Woodbine is the Woodbine Opry.  What started out as a fundraiser to renovate the local high school has turned into a weekly get-together for traditional music--bluegrass and gospel on Friday and electric country on Saturday.  We went to the bluegrass night and I have to say it was friendly and homey but the music was just ok.  The people were as down-home and real as could be and it clearly was the social center of Woodbine (pop. 1400).  Saturday night we again went to the old high school to hear country and hopefully dance (after another bar-b-que dinner, this time at Captain Stan's--rated #1 of 1 restaurants in Woodbine on TripAdvisor and the self-proclaimed oldest tavern in Woodbine).  Well, country night was a blast! 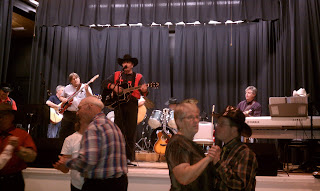 The band was funky but good and the whole town was out there dancin' up a storm.  Then, Denis and Lynnae showed up, with their Fred Astaire city-fied country swing and cha-cha dancing and brought down the house.  By the time we left people were hugging us and inviting us back.  We won a home-made cake in the raffle and one woman told me "Honey, Ah jus' love lis'nin' to y'all tawk" as we were pulling ourselves away.  All in all, a wonderful time at the Woodbine Opry.

On Saturday before the Opry, we spent the day on Cumberland Island.  A long story in itself, this place was once owned by the Carnegie family, now a National Seashore where some of the family still live.  It is amazingly beautiful and alive with history. 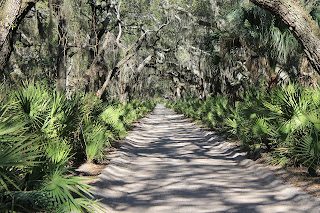 You have to take a ferry to get there and there are very few cars on the island but over a hundred wild horses.  The beach is so long you can't see from one end to the other due to the curvature of the earth.  When we were on it we saw two other people and hundreds of birds as far as we could see. 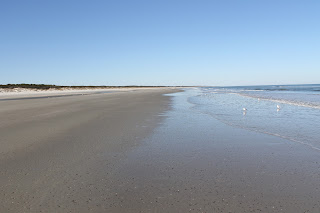 Pictures don't do it justice.   It's amazing to think that in the 70's this island was almost strip mined for tungsten.  And to top it off, on the ferry ride back to the mainland, dolphins were surfing in our boat's wake!

Lynnae also visited the Okeefanokee swamp while I was working one day and she may write about that adventure herself.
At last, this post is being added with the above pictures on March 28. (The puzzle of adding pics is now more completely understood by me.) Anyway, at this point the idea of touring without Denis and/or Tucker was new to me. With a little effort, I made it over to Okefeonkee Swamp/Wildlife Refuge. It was informative and fun in its way. The walking property was open and had guided trails explaining some of the history, along with the prominent fire in 2011. It was an introduction to the birds and landscape of our southeastern U.S., along with the efforts of those who had gone before us to tame that land. Swamp life goes underground when there is a threat of fire; when native Indians returned after fires ignited by lightening, they continued to practice their skills of learning to reap the abundance of the swamp. When modern civilization foresaw opportunity, they tried to drain the land but ran into mother nature's natural resistance: the rivers that the canals were to dump moisture into, did the reverse and flooded the canals, no matter how much effort was applied. The project of a fruit/vegetable farm was abandoned, leaving behind piles of land and grooves for water, changing the landscape and providing us with a visual to the history of the area.
A couple links to learn more: http://en.wikipedia.org/wiki/Okefenokee_Swamp
http://www.fws.gov/okefenokee/

(Uh, oh, I don't know how to relocate the following; it should be placed with the Cumberland Island information...enjoy!)
To see more pictures from this beautiful and interesting area:  https://picasaweb.google.com/102201298868233959049/GeorgiaCoast.

Posted by ClamPuddingPaddler at 6:35 PM