A short couple hours drive took us to St. Augustine, Florida where we had a camping space reserved in Anastasia State Park, just across the harbor from the old city. 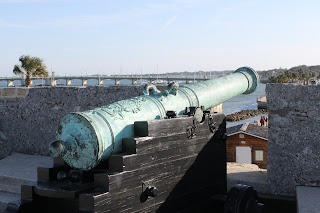 St. Augustine has been a tourist town for hundreds of years and they really know how to do it.  The old Spanish fort lies right on the water and next to the very walkable streets.  We caught a tour of the fort before dark and set up our camper for the week.

For a small city of about 13,000 people, it has a wealth of restaurants (over 220 according to TripAdvisor) and we managed to sample a few during our stay.  Denis worked during the week and Lynnae managed to fill her time with exploring the beautiful beach with Tucker, doing grocery shopping, laundry, riding her bike and visiting the town. 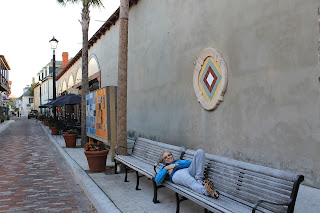 She toured the incredible Flagler College campus, which is housed in the Ponce de Leon Hotel built by Henry Flagler in 1888.We have both been reading a great book about this fascinating man called The Last Train to Paradise  about his construction of the railroad line that essentially created the Florida we have today. Flagler was a partner of John D. Rockerfeller in Standard Oil who took his fortune and started a second career as a land developer and railroad man.  He built the railroad from Jacksonville to St. Augustine, fell in love with the town and moved there, building a few very high-end luxury hotels to draw the richest tourists of his day.  The Ponce de Leon was the first hotel to have all electric lights.  Fron St. Augustine, he extended the railroad to Palm Beach and built a mega hotel there which created that city from basically swampland.  When he extended the railroad to Ft. Dallas in 1898, it had a population of about 300.  The name was changed to Miami a few years later.  In 1905, Flagler started his most ambitious project--building a railroad to Key West.  It took 7 years and cost hundreds of lives, but it was an engineering marvel for it's time.  The railroad was destroyed by a hurricane in 1935 that is still considered the most powerful storm ever to hit the US mainland with winds of over 200 MPH.  Read the book, it's fascinating.

Our last day in St. Augustine, we visited the world's famous Alligator Farm right across the road from our state park campground.  Home to nearly 1000 alligators and crocodiles as well as many birds, turtles and little primates, it is a small zoo that is really quite fascinating.  To see 15 foot alligators from just a few feet away is pretty cool. 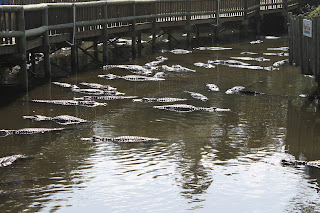 We will definitely go back to St. Augustine someday, hopefully during the holidays when the entire city is draped in white lights (it is considered one of the top few cities in the world as measured by white light displays--not sure who actually keeps track of that).

Next stop--Cape Canaveral and the Kennedy Space Center!
Posted by ClamPuddingPaddler at 12:52 PM