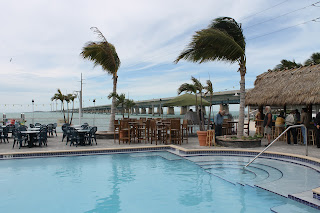 We got an early start, fueled up with coffee and breakfast and headed out through Homestead to the edge of the US mainland where the two-lane highway launches off on the 120-mile journey to the southernmost point of the US.   The day was beautiful and the ocean was turquoise blue in patches.  The first half of the drive to Key West was a little disappointing—not much view of the ocean and a lot of development characterizes the Upper Keys.  But as we got down to the Middle Keys, it opened up and we found ourselves jumping from key to key over causeways and bridges and narrow spits of land, many of which were constructed by Flagler’s crews 110 years ago.  After a few false starts trying to find a place to eat lunch we found [plug for TripAdvisor: our entire trip has been significantly enhanced by using TripAdvisor to find places to eat and things to do] a cool place right at the foot of the famous seven-mile bridge.  It was rather chilly that Sunday so we ate under heaters with fleeces on, but we managed to go out to the pool patio where a two-person band was valiantly trying to play some warmth into the crowd.  We got to dance a couple swings to scattered applause before we got in our rig and headed south again. 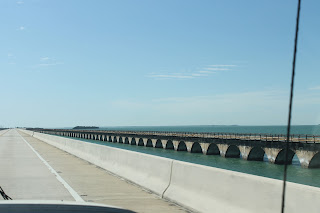 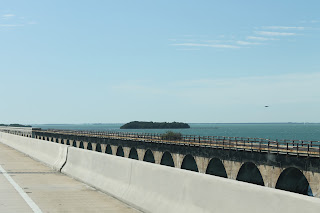 The last 40 miles of the drive was simply spectacular—every key distinctly different and the light blue vistas of the shallow water and reefs sparkled in the sun.  We were almost sorry to cross our last bridge to Key West, but we were also thrilled to be done driving and near such an iconic destination. 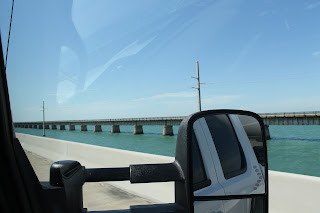 One last challenge awaited us, though—the dreaded “backing up the trailer into a space narrower than an Arkansas outhouse with fifty bored RVers watching, commenting and advising”.  Boyd’s RV Park is an old, family-owned park about 5 miles from the epicenter of Key West.  Like good Republicans everywhere, they maximize revenue by stuffing  the most customers into their limited space.  Lynnae is a champion trailer wrangler and Denis is pretty good at directing and we got our rig squeezed in between huge RV’s on all sides.    We were beat and didn’t feel like braving Key West until the next evening.
SIDEBAR:  HOW DOES DENIS WORK ON THE ROAD?
This might be a good time to talk about how Denis and Lynnae structure their days during the week, because as you know, Denis is still working full time.   Our first Monday in Key West is a great example.  Denis got up around 7, fed Tucker and went for a walk around the RV park.  Boyd’s is right on the water and some of the spots have beautiful views of the ocean and bays.  People are out walking and riding bikes or just sitting on the dock.  Back at the trailer for breakfast and Denis sets up at the dining table with his laptop, wifi hotspot, skype headset and cell phone.  During the morning he will call and email customers, chat with his sales team, have a conference call for a couple hours with his boss and peers.  One of us will make a salad for lunch and we’ll usually eat it outside, then back to work for Denis.  Around 5:30 on this Monday we headed down to the heart of Key West for dinner, walking around and more people watching.  We’re back by 9 or so and might watch a little TV or read before bed.  Pretty simple.  I’ll leave it to Lynnae to write her own posts about what she has been doing, but suffice it to say she is enjoying things like yoga on the beach in early morning, bike rides around the neighborhood and the occasional solo trip to a local sight.

We only stayed in Key West for three nights, but it was a very fun time.  We went into town every evening for dinner and a stroll.  One morning we had a neighbor drive us and our bikes to the very southern tip of the island and we rode back to the camp before breakfast and work—that was a really great activity.  But all good things must end, so on Wednesday we did a rare mid-week trailer move because we had to get up to Key Largo and be settled before our boys arrived on Friday night.  So Denis made a ton of interview calls (he’s hiring salespeople in a couple territories) from the passenger seat of the truck while Lynnae drove the 100 miles up to Key Largo and what was in some ways our most disappointing stay.
Posted by ClamPuddingPaddler at 9:07 PM