I knew I needed to make a business trip up to Boston and NYC the following week, so we planned to visit the Kennedy Space Center on Sunday all day and watch the Super Bowl in some (hopefully) Patriots-friendly sports bar.  We also wanted to find a place where Lynnae could be alone (with Tucker) and have interesting surroundings with something to do.  We found a spot at The Great Outdoors RV Park and Resort, also known as “Pleasantville”.  Picture a planned development like the Pinehills with nearly a thousand lots along streets winding around a village with markets, churches, a meeting hall, post office, etc.  Except instead of condos, you have RV parking spaces that range from a concrete pad with grass around it to a 4,000 square ft. home with an RV carport and “dock”.   People there seemed to love it, we met several who had lived there for years.  It wasn’t our cup of tea.  But we did attend their Valentine Dance and danced till we dropped. 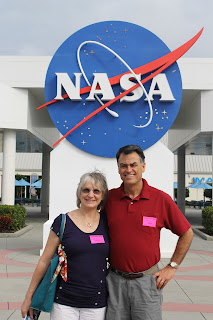 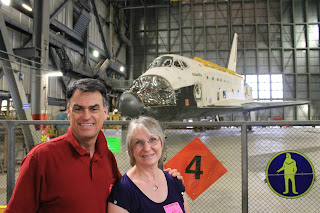 But the KSC was awesome!   Some highlights were: the multi-media recreation of an Apollo moon launch using the original mission control room and tape and film from 1967;  the massive Apollo V rocket suspended on its side in it’s own building with tons of Apollo memorabilia on display; the bus trip to the launch pads for the Space Shuttle missions and the huge building where the shuttles were prepared for launch and attached to the booster rockets; the actual Atlantis space shuttle sitting 15 yards from us looking very “used” waiting to be refurbished for display in its own building next year; and getting a tour of the “rocket garden” from a man who had worked on the space program since the early days and had lots of stories.   If you’re ever in Eastern Florida, the KSC is a must see.  Unfortunately we missed seeing a rocket launch by about a week, but we had to move on because we were headed to a rendezvous  and dive adventure with our boys down in the Florida Keys!

Lynnae dropped Denis off at the Orlando airport the next morning and kept going to the Epcot Center. After trying out some rides (and finding out she still gets motion sickness), she went into the international portion. It was amazing to visit the different countries represented and be able to recall specific memories from previous visits to some of those same countries. Epcot Center did a gret job with beauty and entertainment.

Posted by ClamPuddingPaddler at 6:28 PM